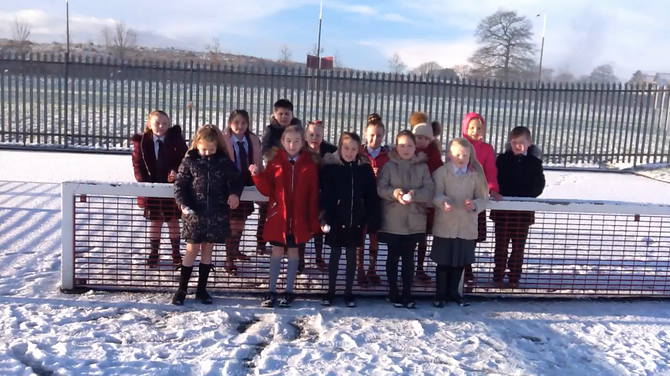 Maths - Fractions in the snow!

Year 4 made the most of the snow this morning and explored some practical ways we can show equivalent fractions!

We had a class debate in character as the local villagers to decide what to do about the Iron Man. The class were either for or against trying to help the Iron Man.

We then used a conscience alley to help decide what is best to do next.

We continued our work with fractions and used cubes to help work out fractions greater than 1.

Year 4 LOVED dirty writing to help them with their fractions work! Don't worry, they have been told not to try this at home!

Thank you to all the parents who were able to come to this mornings reading breakfast. The children always love having the opportunity to read to their parents.  We hope you enjoyed the refreshments too!

The children worked in groups to highlight interesting vocabulary from the first chapter of the book. They then found the definition and included it in a sentence.

Making our own Iron Man

Year 4 had lots of fun designing and creating our own version of the Iron Man. The children worked in samll groups on various parts of the robot and were thrilled with how it looks!

Continuing with our new book, The Iron Man, the children hot-seated in character and answered questions from the class about where they thought the Iron Man was from, why he was here and what they think he will do next.

Yesterday we looked at a box with lots of strange and unusual objects in it. The children had a discussion and made predictions on where they thought they might be from. Then we read the first page of our new book....

Continuing our Sound topic in Science, the children made their own paper telephones to help understand how sound can travel better along a solid object. Who needs iPhones!?

Year 4 had lots of fun making sandwiches with Mrs Size as part of their Food Technology learning and discussed the importance of lots of fresh vegetables in our diets.

After using their prior knowledge, the children estimated the area and perimeter of the basketball court. We then braved the elements and measured for ourselves!

We were all quite close with the perimeter, but were way off with the area!

There are a number of short videos that were recorded today. They can be viewed under under the Video Resource Centre section under the Children tab.

The children had a brilliant time at the Dewa Roman Experience today. They marched through the streets of Chester led by a Roman soldier, explored excavations and discovered just what life was like in Roman Chester! An unforgettable experience all round!

Year 4 had lots of fun last Friday raising money for Children In Need. We finished the day off by running the mile with Year 1. 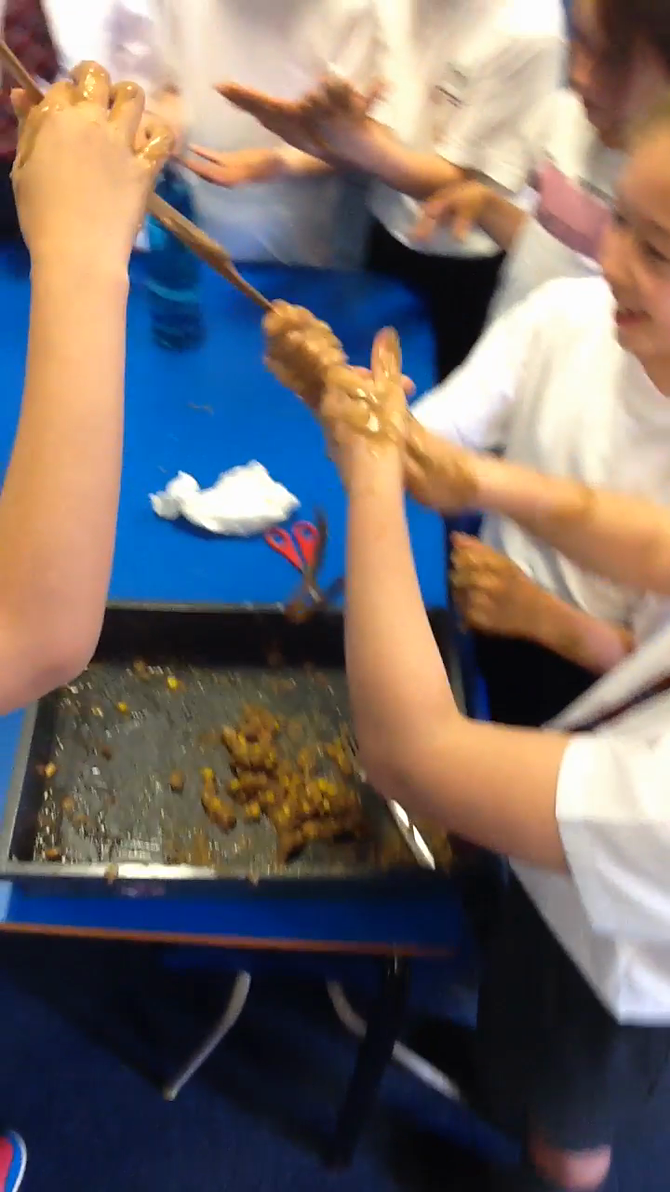 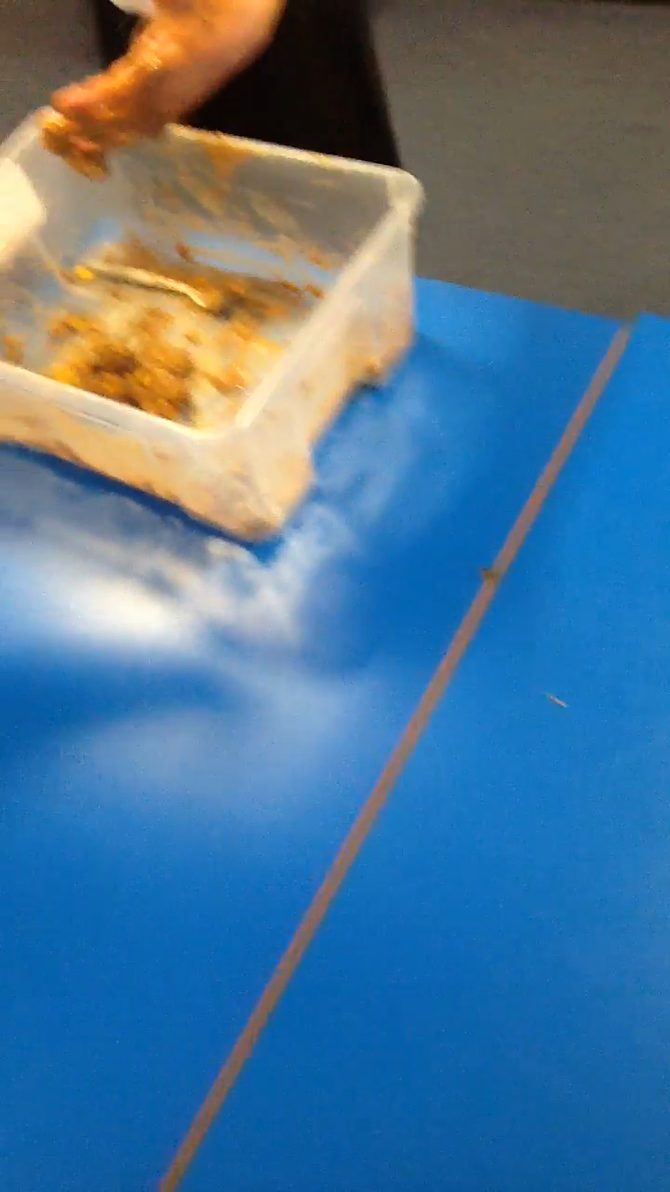 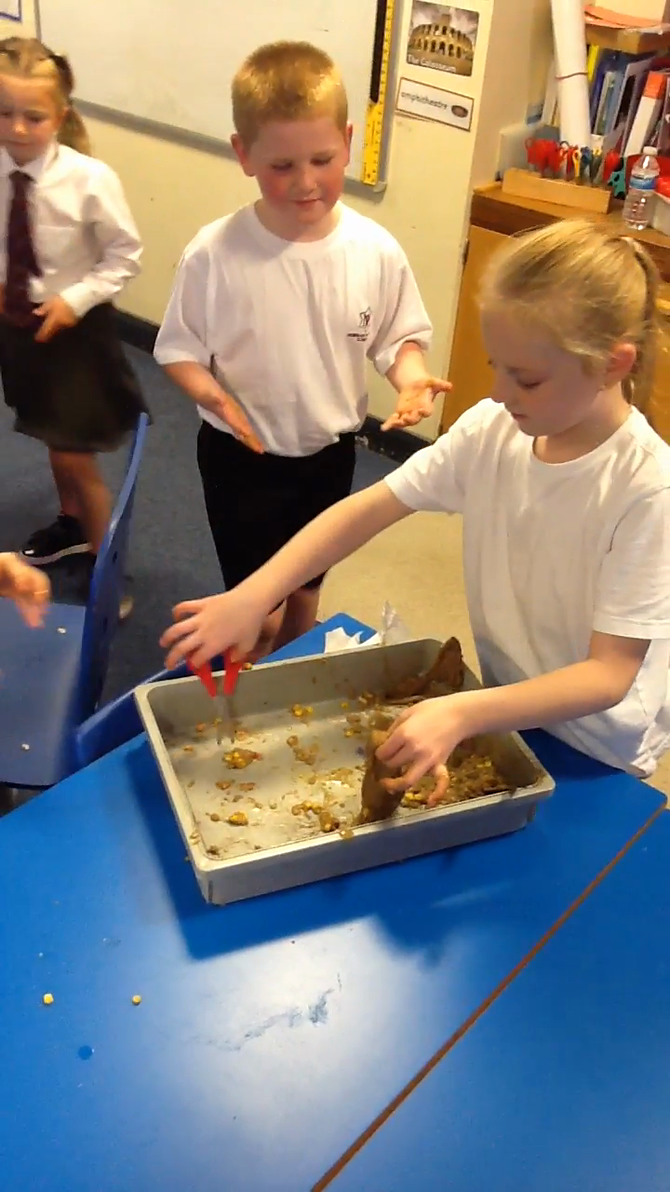 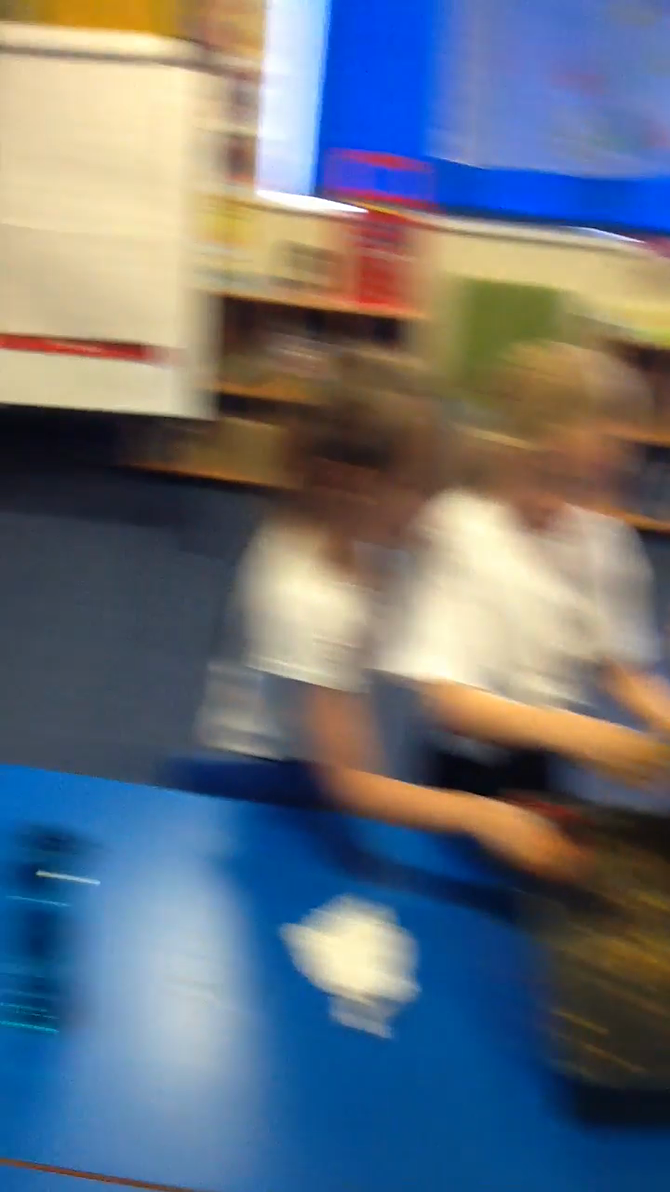 The class had lots of fun putting into practice what they had learned about the digestive system. The children loved getting their hands dirty and making their own version of poo! Afterwards they were all able to accurately describe each process and the various functions of different body parts. A lovely way to end the half term!

Health Day - A Mile Before School! 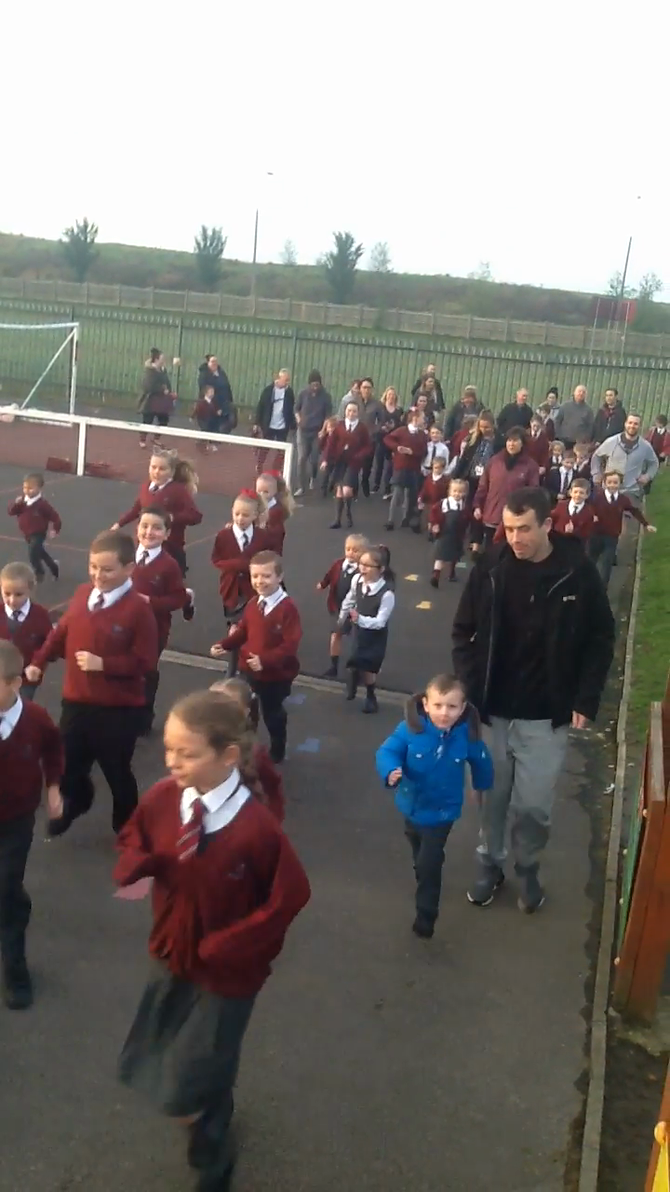 A massive thank you and well done to all the parents and children who participated in our Health Day Mile this morning. The turnout was fantastic and we smashed our target distance of 50 miles! Year 4 have loved doing the mile each day and are getting faster and faster.

Year 4 had lots of fun today learning about how infection and bacteria can spread and the importance of washing hands thoroughly. The children used a special UV gel that showed how germs can stay on skin unless washed properly, then the children shook hands to see just how far the infection can spread! We used a special UV light to see the germs. We discovered that fingernails are very popular with germs!

Year 4 loved researching, sketching, designing and finally making their own Roman mosaic. They worked with Miss Size to try and make them as symmetrical as possible. The finished results were excellent!

Today we have been using Numicon to identify and represent numbers.

Maths - Greater than, Less than, Equal to.

The class had lots of fun playing games in pairs to find and determine whether numbers were greater than, less than or equal to other number values.

We have continued our work on newspapers - identfying features of headlines, introductions and captions.

The class enjoyed meditation - the relaxing breathing exercises really helped them to focus and relax.

Year 4 have continued to learn about the different notes that can be played and have began to listen and write notes down themsleves, including crotchets and minims.

Year 4 have been exploring what they believe good/bad behaviour looks like.

Year 4 have been learning about Roman coins and have now created their own using clay.

Year 4 have continued learning about the features of the guitar, and began playing notes. 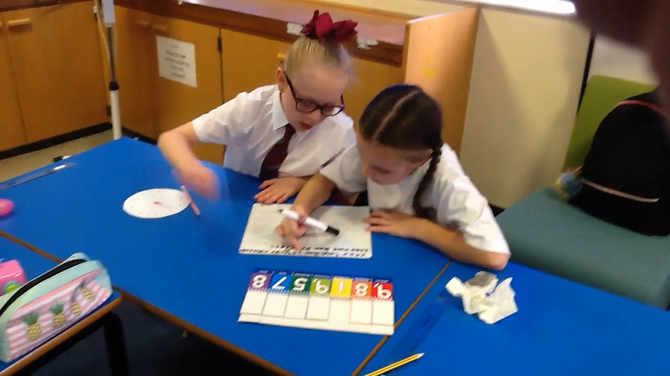 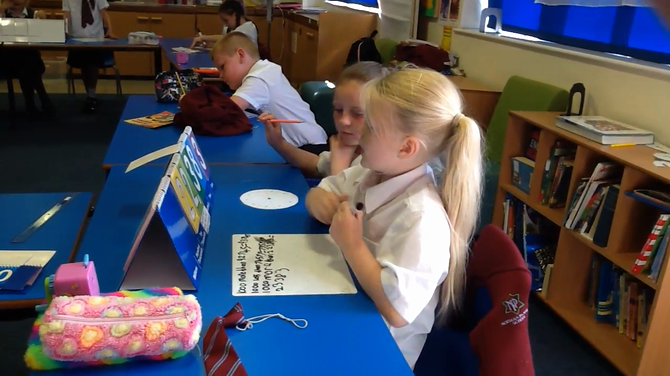 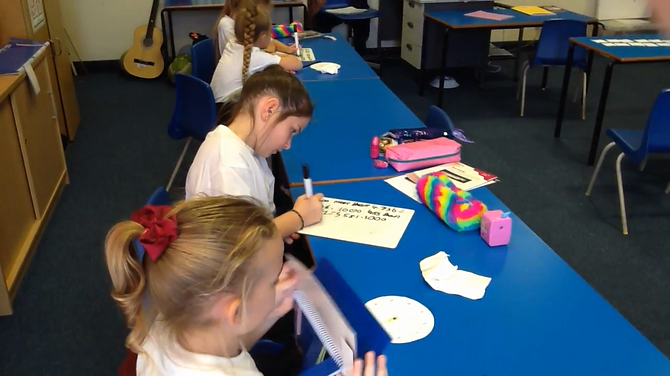 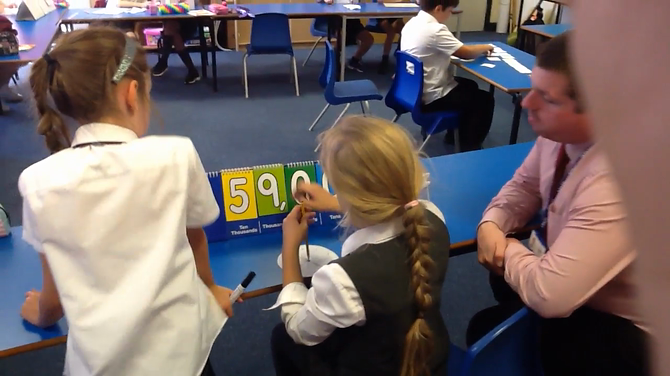 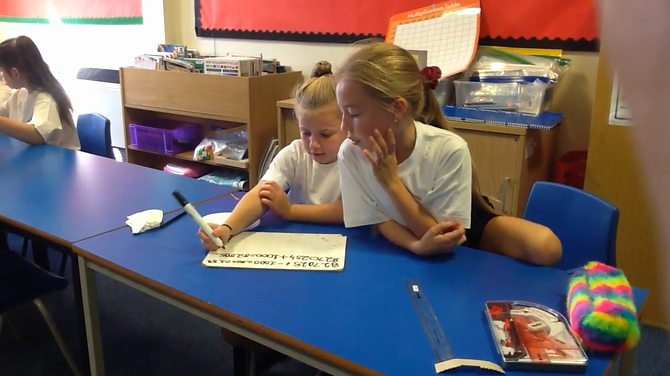 We have been creating and solving our own place value problems using spinners. Some of us were even solving 7 digit problems!

Year 4 worked on their basketball passing skills, using bounce passes to pass the ball to each other.
Top

Unfortunately not the ones with chocolate chips.

Some cookies are necessary in order to make this website function correctly. These are set by default and whilst you can block or delete them by changing your browser settings, some functionality such as being able to log in to the website will not work if you do this. The necessary cookies set on this website are as follows:

Cookies that are not necessary to make the website work, but which enable additional functionality, can also be set. By default these cookies are disabled, but you can choose to enable them below: